I am a magistrate in a Family Court in Cape Town South Africa, and I am interested in how to ensure a more consistent practice of Therapeutic Jurisprudence in Family Courts.

Three concepts described and taught by the International Institute for Restorative Practices (IIRP) namely the:

could present a grid through which judges might reflect on their judging to improve the therapeutic impact of the Family Court process.

First looking at the design of the law to see whether it is “TJ friendly”, I note that the Family Court in South Africa is a new forum made possible by new laws enacted in the post-apartheid era. These laws that are:

One section in the Constitution states that a child’s best interests are of paramount importance in every matter concerning a child. This astoundingly general statement in the highest law in South Africa gives everyone engaged in matters concerning a child, an open door to be creative and innovative in a way that magistrates could not otherwise be.

The Children’s Act uses phrases that encourage informal non-adversarial proceedings, conducive to attaining the co-operation of everyone involved and discourages a confrontational approach.

Although the Maintenance Act only has one phrase in the pre-amble that contains the rhetoric of TJ, namely “the importance of a sensitive and fair approach”, there are two other doorways that can be used by a TJ friendly magistrate. The Constitutional imperative to consider a child’s best interests and Case Law in which a Judge stated: “… the maintenance court functions as a unique or sui generis court”.

However, despite these therapeutically designed laws (TDL) or “bottles”, the Therapeutic Application of the Law (TAL), TJ “wine” or TJ practices are not guaranteed in the Family Court of South Africa.

Restorative practice concepts, namely the Social Discipline Window, Fair Process and Restorative Justice Typology, could be used by judges to do some “wine tasting”.

The fundamental unifying hypothesis of restorative practices is that “human beings are happier, more cooperative and productive, and more likely to make positive changes in their behaviour when those in positions of authority do things with them, rather than to them or for them.” (Wachtel, 2013).

Juxtaposing the difference between authoritarian and authoritative could be used to identify a more TJ as opposed to a non-TJ style of the magistrate.  The TJ magistrate will do “with” whereas the non-TJ magistrate will do “to”.  A magistrate familiar with the Social Discipline Window can be intentional about adopting the restorative “with” stance and thereby have greater chance of implementing a TAL.

Lately neuroscience is proving the effectiveness of this style of exercising authority. Wachtel, J. (2012) writing about Chuck Saufler’s presentation at the IIRP 15th World Conference explains how he used the SDW to show the effect on the brain of the four windows.

In the NOT box (low support, low control) an individual’s develops a “reactive, defensive” outlook.  In the TO box (high control but low support) an authoritarian zone, a person will develop a posture of “anxious vigilance.”  Where things are done FOR a person (high support, low control) they will develop a “passive, enabled” outlook and seek attention through negative behaviours. …He also said that when a person is threatened they cannot focus. It is only in the WITH box, the restorative range, that a person can adopt and maintain a disposition of “relaxed alertness”.

A magistrate familiar with the SDW can be intentional about adopting the restorative “with” stance and thereby have greater chance of implementing a TAL by creating an atmosphere in which the parties are not reactive defensive, anxious vigilant or passive enabled but relaxed and engaged and more able to engage positively in the process.

Fair Process describes what doing “with” looks like. Although this model introduced by Kim & Mauborgne (2003) is traditionally associated with business management it presents three actions that if used by Magistrates in the proceedings, would result in a doing “with” TAL.  These are:

By using Fair Process, a magistrate could ensure that the parties appearing in court feel heard.  For example by:

Fair Process dictates that this would result in a more lasting and satisfying outcome for the parties. 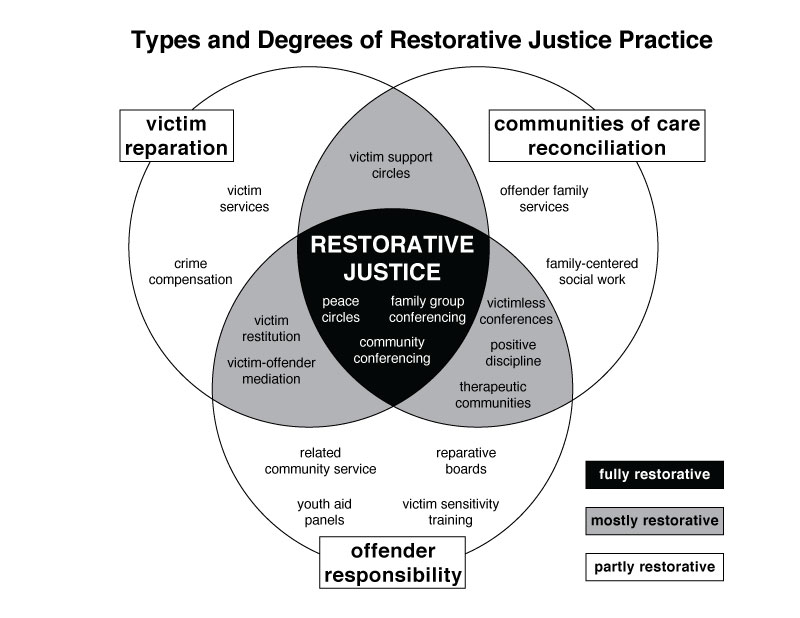 In explaining the Restorative Justice Typology in the context of criminal law, Wachtel (2013), says:

The proceedings in the Family Court, albeit not of a criminal nature, can still be evaluated using the Restorative Justice Typology.

The applicable processes are found in the inner circles, specifically family group conferencing and community conferencing.  The magistrate can order a child to be removed summarily or alternately order a social worker to conduct family group conference to get all involved to find their own solution.  The level of meaningful emotional involvement and greater participation in decision making by significant family members, determines the degree of how therapeutic the court process and its outcome can be.

Alternate Dispute Resolution (ADR) is another example of using Restorative Justice Typology.  Although the Maintenance Court has less opportunity than the children’s court to function in a TJ way, I have incorporated aspects of ADR into the process.  I explain ADR practices to the parents (with or without legal representatives) and ask if they are open to trying it out.  If they agree, I order the parents to attend a mediation on a Saturday morning. I have gathered a group of about twenty-five professionals trained in Family Dispute Resolution Mediation, to volunteer periodically on a Saturday morning.  Each couple is given at least two hours per session with two mediators, usually a legal and health care professional duo.  This practice is a pioneering project that is attracting attention because it has improved the case flow time and resulted in about only ten percent of the cases, referred to the mediators, needing to be resolved by formal adjudication.

So, the questions magistrates could ask of themselves in line with using the three restorative practice concept could be…

Have I engaged, explained and clarified expectations?

Have I involved all the parties and considered mediation or Family Group Conferencing as an option?

Restorative practices can offer a helpful wine tasting guide to magistrates in the Family Court.  Promoting the Therapeutic Application of the Law in this manner is the very purpose of this Amicus Justitia brief.

A short video presentation of this proposal is available here:

Figures used with permission from the International Institute for Restorative Practices and Chuck Saufler from Safe Schools for All.